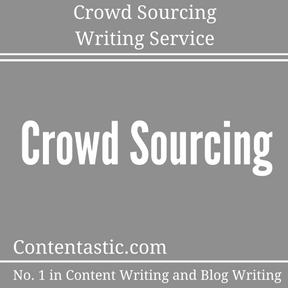 Crowd Sourcing is a modern business term, which was introduced in 2005. It is defined by Merriam-Webster as the process of obtaining needed services, ideas, or content by soliciting contributions from a large group of people and especially from an online community rather than traditional employees or suppliers. This mode of sourcing is often used to divide tedious work between participants. It has a history of success prior to the digital age. By definition, Crowd Sourcing combines the efforts of numerous self-identified volunteers or part-time workers, where each contributor acting on their own initiative, adds a small contribution that combines with those of others to achieve a greater result; however, it is distinguished from outsourcing the work comes from an undefined public rather than being commissioned from a specific.

Crowd Sourcing is the process of getting work or funding from a crowd of people. The word is a combination of the words ‘crowd’ and ‘outsourcing’. The idea is to take work and outsource it to a crowd of workers such asWikipedia.

Instead of Wikipedia, creating an encyclopedia on their own, hiring writers and editors, they gave the ability to the crowd to create the information on their own. It is the most comprehensive encyclopedia the world has ever seen.

The principle of crowd Sourcing is that more heads are better than one. By canvassing a large crowd of people for ideas, skills, or participation, the quality of content and idea generation will be superior.

Crowd funding involves asking a crowd of people to donate money to the project. For example, if people want to raise $10,000 to pay for studio time to record a new CD, crowd funding can help them to raise that money. People find a crowdfunding platform, set the goal amount, deadline, and any rewards offered to donors. They must raise 100% of the goal before the deadline or all the donations are returned to the donors. Deadlines are typically less than 60 days.

The practice of obtaining needed services, ideas, or content by soliciting contributions from a large group of people and especially from the online community rather than from traditional employees or suppliers.

Crowd Sourcing is the practice of engaging a ‘crowd’ or group for a common goal such as innovation, problem-solving, or efficiency. Crowd Sourcing can take place on many different levels and across various industries. Thanks to our growing connectivity, it is now easier than ever for individuals to collectively contribute whether with ideas, time, expertise, or funds to a project or cause. This collective mobilization is Crowd Sourcing.

This phenomenon can provide organizations with access to new ideas and solutions, deeper consumer engagement, opportunities for co-creation, optimization of tasks, and reduced costs. The Internet and social media have brought organizations closer to their stakeholders, laying the groundwork for new ways of collaborating and creating value together like never before. The approach is being embraced:

“Millions of people connected by the Internet are contributing ideas and information to projects whether it is big and small. Crowd Sourcing is helping to solve tricky problems and providing localized information. Contributing to the crowd with the right knowledge and using its wisdom is easier than ever.”

Crowd Sourcing include all social and business interactions. It is changing the way we work, hire, research, create and market. Governments are applying crowd Sourcing to empower citizens and give a greater voice to the people. In science and health care, crowd Sourcing can democratize problem-solving and accelerate innovation. With education, it has the potential to revolutionize the system such as crowdfunding is currently challenging traditional banking and investing processes.

We have a network of over 700,000 Clickworkers to handle and complete the projects without any overhead costs. This means that the company profits from a flexible reaction to peaks in demand, and unexpected large-scale projects do not represent an insoluble task

The term “crowdsourcing” was originally introduced by “Wired Magazine” writer Jeff Howe in 2006 and is a combination of the words “outsourcing” and “crowd”. Outsourcing traditionally describes transferring work processes from the own company to an external service provider in order to use the economies of scale involved and minimize costs. Generally, a crowd describes a large number of individuals who form a community.

The crowdsourcing principle describes a process in which companies outsource parts of their work processes and fall back on a community of thousands of people instead of individual service providers.

The crowd is always a good choice whenever companies have to handle a larger number of tasks in a relatively short period of time. The use of the crowd makes a large number of workers available on demand without creating any overhead costs. Therefore, when demand is irregular, a company can make use of the manpower of thousands of workers on a flexible basis.

It goes without saying that the crowd is best used for tasks that are easily divided into individual work parcels and then reassembled to a convincing overall result after completion. In addition, the task is being outsourced must not require any profound knowledge of the own product or company. This is essential to ensure that a sufficient number of qualified workers are available to implement the project in a short period of time and provide satisfactory results.

In 1968 a Norwegian science fiction writer named Tor Åge Bringsvard published a peculiar short story called “Codemus.” The story has achieved the kind of retrospectively prophetic quality that makes sci-fi such a useful imaginative map for navigating our relationship with technology.

A worldwide computer network provides information freely, although people have access only to end-user terminals. Everyone has been equipped with a digital assistant that we might recognize as a Smartphone, right down to its sinister double-duty as a tracking device.